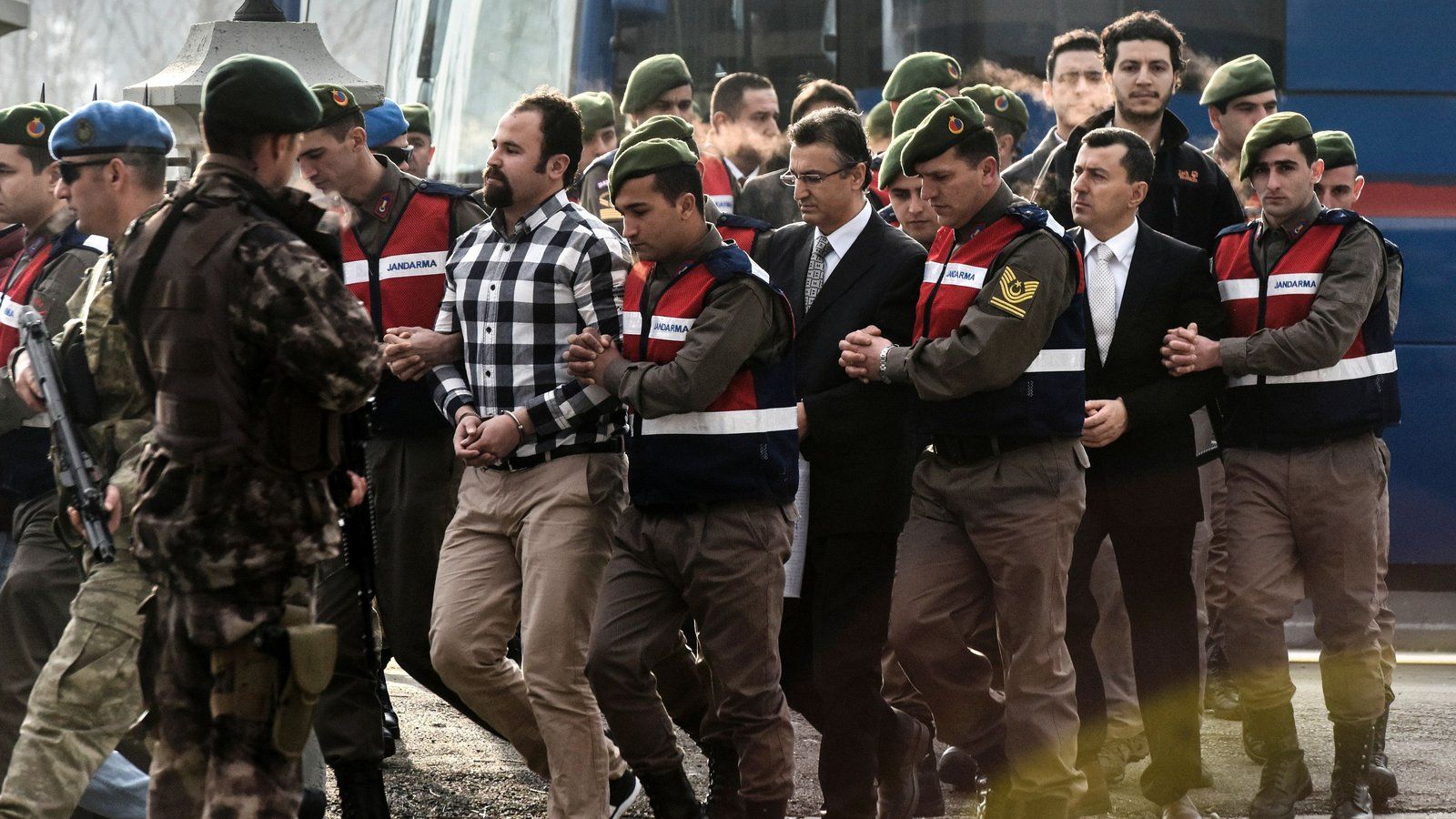 Written by Scott C. Alexander, PhD. Posted in What went wrong with Turkey?.

Purge, Persecution, and the Imperative to Stand with the Innocent in Turkey

The disturbing meme depicting criminals impaled on hooks with the words "The ideal method of execution for [the members of] the Fethullah Terrorist Organization: The Ottoman Way" is making its way around Turkish social media. Apparently, the image itself -which cannot be published here due to its graphic content - originally comes from a traditional miniature illustration in an Ottoman manuscript and was recently appropriated as the lead image in a similarly titled article published on the pro-government haber7.com media website. [1] This article begins with a note of fond nostalgia for a time when the punishment of rebels against the state could be quick and decisive because governments did not have to worry about the inconvenience of “inquiries” and the “courts.”

I can remember a time--just a little more than a decade ago--when pride in Selçuk and Ottoman heritage among Turks took the form of everything from celebrating the great mystical poet Jalal al-Din Rumi (depicted just beneath this recent meme), to emphasis on the traditional Ottoman embrace of ethnic, cultural, and even religious heterogeneity, to reveling in the stunning beauty of Ottoman art and architecture. And now, look where we are. Some (certainly not all) are stoking the flames of an intolerant populist nationalism which takes perverse delight in touting as an Ottoman solution to the current problems of social tension and political unrest in contemporary Turkish society, nothing less than brutality and torture.

What happened? What went wrong?

As many of you know, last year at this time, the lives of so many good, decent, and innocent people were changed forever. A still nebulous group of criminal conspirators staged an attempt to overthrow the democratically elected government of President Recep Tayip Erdoğan of the Republic of Turkey. Before the attempt was completely quelled – and long before any legitimate and lawful investigation could take place – President Erdoğan appeared on national television and accused M. Fethullah Gülen, the widely revered spiritual leader of the global service movement known as Hizmet, of being the mastermind of the coup attempt.

Given that the previous few years were witness to a deterioration in the always cautious but nonetheless impactful mutual affinity between Erdoğan's Justice and Development Party and the Hizmet Movement, Erdoğan's utterly unfounded accusation was not entirely surprising. Well before the events of July 15, 2016, Erdoğan had been looking either to enlist the unqualified support of the Hizmet Movement in his authoritarian quest for nearly unlimited executive power, or to demonize them as the ultimate enemy of the Turkish people around which he could rally a new coalition of secularists and Islamists. Since Gülen had already made clear that the commitment to real democracy must supersede loyalty to any one leader – no matter how successful he or she may have been in the past – it was nearly inevitable that Erdoğan would turn against the man and the movement he once rightly perceived as key allies in the common cause of establishing Turkey as a vibrant Euro-Asian Muslim-majority democracy.

As we now know, what ensued the failed coup attempt was not a moment for authentic national celebration, healing, restored unity, and solidarity based on an even more vigorous embrace of the rule of law and an ethos of patriotic inclusivity. Instead, what ensued was a reign of terror in which Erdoğan initiated a now infamous Purge of Turkish governmental and civil institutions. Not only has this Purge done irreparable damage to the lives of countless innocent men, women, and children. Tragically—and ironically—it has also served to enshrine President Erdoğan, a man who many of us once thought might one day be hailed as a “Muslim Mandela,” in the ignominious hall of those many dictators who have hijacked their own peoples' legitimate aspirations for liberty and prosperity as a means of feeding their own insatiable lust for power.

Among many other human rights violations, Erdoğan's Purge has resulted in the immoral imprisonment of tens of thousands of loyal Turkish citizens – including kindergarten teachers and elderly grandmothers – whose only crime is their attempt to be better Muslims, indeed better human beings, by following the teachings of a man whom they understand as having the courage to live a life of principle in a world which tends to reward tribalism over morality. To this day, innocents languish in prison, and those who have not yet met this fate, live in fear that they will be stripped of their livelihoods and driven out of their homes as the "terrorists" they have been so absurdly and unjustly branded by this tyrannical regime.

Meanwhile, here in the United States, a few leaders of Muslim civil rights and other civic organizations have engaged in the blatant hypocrisy of condoning the Purge and even aiding and abetting Mr. Erdoğan in his efforts to crush the movement. They have willingly ceded to members of the Erdogan administration, consular corps, and even Erdoğan family members, key public platforms (such as conferences and Friday Prayer appearances) from which the latter have actually engaged in the essentially Islamophobic practice of branding innocent Muslim Americans as “terrorists” and “cult” members. These few U.S. Muslim leaders feebly attempt to justify this disgraceful behavior by appealing to: Mr. Erdoğan’s many successes in helping to lead a multi-year boom in the Turkish economy during the 2000s; his allegedly tough stance toward Israel and allegedly singular concern among Muslim heads of state for the longsuffering Palestinian people; and his admirable commitment to the millions of refugees of the Syrian civil war who have found safe haven in Turkey. I still am unable to understand why these Muslim Americans cannot give Erdoğan his due while at the very same time stand in unqualified solidarity with all the innocent men and women of Hizmet and others who have been the victims of his ruthless quest to consolidate power.

Similar pro-Erdoğan dynamics are at work in other countries. This is especially the case in certain nation states with Muslim-majority or substantial Muslim populations where the government wishes, for economic and other reasons, to stay on good diplomatic terms with the current Turkish regime, and where there are substantial popular pro-Islamist sentiments which, especially in gloomy fog of the dashed hopes of the so-called “Arab Spring,” have elevated Mr. Erdoğan to the profoundly ironic status as icon of ‘Muslim democracy.’ Governments from Malaysia to Turkmenistan to Nigeria have been pressured by the Turkish government to shutter Hizmet institutions and extradite countless school teachers, entrepreneurs of social cohesion, business people and aid workers to Turkey for prosecution as criminal insurgents and “terrorists.” In some cases these efforts are still being met with principled resistance. In many cases they have tragically succeeded.

The good news in all of this is that, one full year after the illegal and immoral coup attempt and the equally illegal and immoral Purge, the Hizmet Movement still survives as a testament to the power of a sincere faith in God and human goodness, even in the face of vile oppression.

I humbly implore all who read these words to join me in giving thanks to al-Hafiz (the Divine Protector) for continuing to watch over Mr. Gülen and all the good people of Hizmet. Join me in imploring al-Shafi (the Healer) to bring comfort to all those brave Turkish citizens who lost their lives one year ago and those who continue to suffer the effects of both the criminal coup and the tyrannical Purge. Join me in begging al-Shahid, (the Witness), al-`Adl (the Source of All Justice) to expose the guilt of those truly responsible for the coup as well as the Purge, so that the innocent may at last be set free. Join me in praying to al-Nur (the Light) to illumine the path of all the noble people of Turkey, and all who support them, so that they may find the path to mutual forgiveness and thus come together to forge a more just future for all.