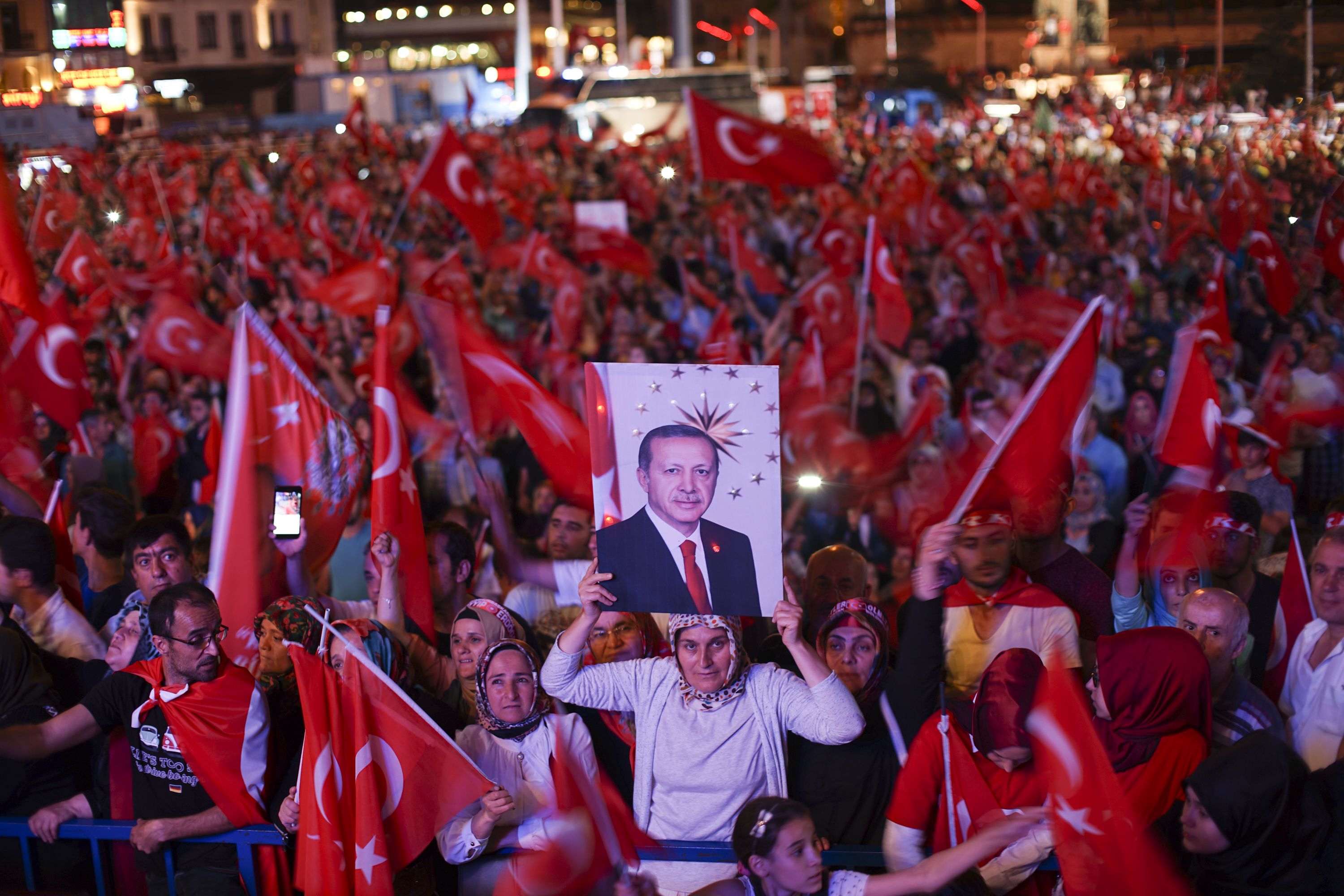 Written by Sophia Pandya, PhD. Posted in What went wrong with Turkey?.

Human rights violations in Turkey have increased exponentially in the aftermath of the July 15, 2016 attempted coup. Turkish President Recep Tayyip Erdoǧan blamed the plot on the Hizmet (Gülen) movement, and seized the opportunity to throw many of those he considered as opposition in jail. In all, over a hundred thousand people have been arrested, despite a lack of evidence against the vast majority of those detained. The UK Foreign Affairs Committee states there is a lack of credible evidence the movement was behind the coup, [1] and Fethullah Gülen, Hizmet’s founding figure, flatly denies involvement.

Nonetheless, since July 15, women have been subjected to an uptick of a variety of intimidation strategies, including rape, the threat of rape, harassment, and other forms of violence—not only by Erdoǧan’s AKP-led (Justice and Development) government, but also by civilians emboldened by the new climate in which macho, hyper-masculinity and misogyny have become widespread. Many women whose families are affiliated with the groups currently targeted by the crackdown (i.e. Hizmet participants, Kurds, Alevis) have reported experiencing psychological trauma. Unsurprisingly, the political turmoil has also negatively affected children in a myriad of ways.

Declaring a “state of emergency” (still in place for an indefinite period of time), and abandoning the European Convention for Human Rights, Erdoǧan has also fired thousands of educators, police, judges, prosecutors, journalists, and shut down (or taken over) schools, universities, businesses, and media outlets. [2] On the eve of the one-year anniversary of the attempted coup, he sacked 7,000 more in a single day. [3] This unprecedented onslaught is widely termed the “purge,” and the Turkish president appears willing to refashion the very fabric of society through oppression and violence. Internationally considered a populist authoritarian, Erdoǧan has also incited attacks against those he opposes. Recently, he called for the reinstatement of the death penalty and the beheading of those he deems responsible for the coup. [4]

The Turkish president is also no feminist: he has stated that women who have not chosen to bear at least three children are “deficient” and “incomplete,” [5] and that women have a “delicate nature” and are “unequal” to men. [6] Not long after the putsch attempt, feminists noted an increase in attacks and harassment on the street. Journalist Pinar Ersoy writes that women have been “silenced” during the purge, and that women’s groups have been targeted. [7] A soccer club executive actually tweeted that the wives of any coup plotters should be considered “spoils of war.” [8] The lack of women during street protests also speaks to the heightened climate of fear.

During and after political conflict in general, women and children are the ones most severely afflicted by hardships such as poverty, displacement, insecurity, and sexual and domestic violence. [9] In the aftermath, men tend to attempt to reinstate patriarchal “order,” sometimes through violent means. [10] During the purge in Turkey, women from a variety of marginalized communities (Kurdish, Alevi, Hizmet-affiliated) have been particularly affected by financial difficulties, violence, rape, and demeaning treatment, even during and after childbirth. [11] A forty year-old lawyer, Frank [12] brought his family to the US despite his wife’s reluctance to leave Turkey, when he realized that the government was even “jailing mothers with ten day-old children.” He added, “I couldn’t take this risk.”

An estimated 16,000 to 20,000 women are currently held in prison; in some cases, they’re being used as hostages to coerce their male relatives to return to Turkey from abroad, and as an intimidation technique intended to silence dissent among their families. [13] Tarik, a fifty year-old man in the construction business from eastern Turkey, fled his homeland but worried about his family being arrested in his place as he is affiliated with the Hizmet movement. He stated, “They also started putting wives in jail if they can’t find their husbands. So, my family came to the US in January.” In prison, women report being subjected to systematic humiliation, including naked searches by male guards. [14] In a Muslim patriarchal society, a violation of a women’s body is a dishonor to her entire family, especially for her male kinfolk who are traditionally responsible for protecting her. An acquaintance in his twenties, affiliated with the Hizmet movement, told me that his fiancé abruptly broke off their engagement after her trauma of spending time in jail.

For many women not jailed or physically hurt, the psychological effects of the purge are nevertheless damaging. Fatma, a forty-two-year-old housewife from Erzurum, was briefly detained and interrogated about her husband’s Hizmet-related activities. After her release, she began having problems with her mental health. She confided, “Because my psychological state was so bad, I took medications. I’m still under this medication.” Her eighteen-year-old daughter, Hatice, also suffered from the stigma when her classmates found out about the allegations against her father, and they socially ostracized her.

Children exposed to political conflict are also in danger of suffering from PTSD or anxiety. [15] Currently, over 500 children are being raised in jail by those mothers who are among the imprisoned, or left behind when their mothers are suddenly detained, in one case in a parking lot. [16] Fatma’s younger daughter, Elif, 17, expressed frustration with being displaced by the coup. Now attending school in California, she said, “I feel stupid, because I don’t speak English. Yes, I cried when I left Turkey, because we were living with our grandparents. I miss all my family members. After we left, our grandmother got paralyzed because of these events.”

Tarik also spoke to me about the effect the purge had on his children. He explained, “My kids’ psychological well-being was disturbed because every time my car stopped, they worried that the police had stopped us. Police officers with rifles were coming to their schools during school hours, like SWAT teams.” When his younger daughter finally arrived in the US, she didn’t leave her room for the first two weeks.

Many children affected by the coup also found their education disrupted. A sixteen-year-old boy was stuck in Seattle, having arrived on a trip with friends, right before the events of July 15th. He said that the government had shut his old school down, and that if he returned, he would be assigned to a random public school. He was unsure about whether or not he would seek asylum in the US, or return, but he was most distressed about his family still in Turkey. He explained, “I’m sad about my family and their future, and what might happen to them. I’m concerned about their security.” Over two thousand educational institutes in Turkey have been closed, and tens of thousands of teachers and professors were fired. [17] Due to the instability caused both by the purge and attacks by the Kurdish PKK (Kurdistan Workers’ Party), intellectuals are fleeing the country, leading to a Turkish “brain drain.” [18]

Women and children are the unseen victims of Erdoǧan’s purge, and the effects will doubtless reverberate through Turkish society for decades. Those thousands of women jailed are acutely vulnerable to physical (including sexual), emotional, and psychological abuse. If they have young children, these children are either left behind, or they find themselves also behind bars. Those women at home whose male relatives are incarcerated risk financial hardship, displacement, and lack of physical security. The children at risk face the disruption of their education, as well as anxiety, depression, and PTSD. According to psychologist Jack Saul, survivors of collective trauma may also experience a sense of betrayal and insecurity, shattered relationships, and the inability for adults to effectively care for their children. [19] For the most vulnerable victims, weaving lives back together again, and moving towards healing, will be an immense challenge.

[12] Names of interviewees have been changed for their protection and privacy.