Written by fgulen.com. Posted in Biography.

The Physical, Historical, and Sociological Background 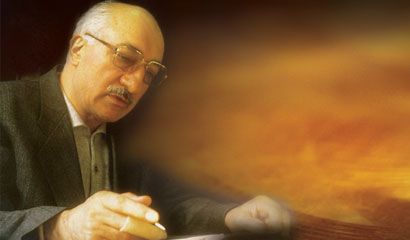 Certain times, conditions, and even places are like wombs that, when impregnated with certain events, give birth to certain personalities.

When the twentieth century arrived, one important thinker commented, the world witnessed the collapse of "a great, unlucky continent; a glorious, unfortunate state; and a valuable, unprotected nation." With the words "a very noble nation, alas, was disgraced," M. Akif Ersoy, Turkey's national poet and composer of the Turkish national anthem, lamented the decay of the Turkish people and the Ottoman Empire.

Centuries earlier, Turkish tribes had suddenly gushed forward like a spring from Central Asia's high mountains and plateaus and, wave upon wave, flowed to the West. First settling in Anatolia, they gradually became heirs to a magnificent civilization under the calm, serene shadow of which a considerable part of the world had lived for 5 centuries. As the carriers of this civilization, they advanced far into Europe's heart, embroidering the lands they conquered with wonderful works of civilization. However, similar to human beings, civilizations and states have natural life spans consisting of birth, youth, maturity, old age, and death, as if they were determined in the eternal past.

Any judgment made in past eternity occurs within the framework of specific causes and humanity's partial free will. If this were not so, we would justifiably be fatalistic, for fatalism contradicts the mind and logic, as well as historical, sociological, and even psychological truths.

Our bodies age and draw closer to the grave. Like a new day that appears on the horizon with a baby's innocence, we experience the morning of youth, the noon of maturity and afternoon of old age, and then we set and are gone. The same thing is repeated in the seasons, which occur within a predestined framework. Civilizations and states follow the same procedure, but are apparently dependent on their representatives' choices and conduct.

All historical events occur in an identical way and a similar framework, and thus teach us something. Seeing the similarities between these events, between the development and decay of one state and civilization and the other, we can derive accurate results and valuable lessons.

In establishing this universal truth, we must never forget that human beings are not, as materialists claim, "organic" machines. Rather, they have a physical body and a spiritual side, many confused and perplexing feelings, and a curious and questioning intellect or reason that makes them sorry for the past and anxious about the future. In addition, they have other special faculties, among them a heart that is contented only with special "food." To perform their particular duty, responsibility, and function, and thereby be fulfilled as a "human" and attain real happiness, they must be nurtured emotionally and spiritually, mentally and physically. Thus, although we have no control over any aspect of our birth and death, cannot meet many of our needs, and live within a certain social framework, each of us has a free will to direct his or her life. Therefore, it seems to be individuals who make human history. We are accountable for our acts and receive what we have earned. This is the difference between human history and the life of "nature."

With their external appearance, inner depth, good proportions, surrounding vineyards and orchards, cascading streams and breezy atmosphere, our old cities softened all hearts. They enchanted all dreams, and intoxicated those who stopped for a while in them.

Colorful lights from beyond rained on the cities; intimacy, love, and affection gushed out of the ground; and city inhabitants breathed a unique communion each moment in the city's bosom. These galleries of beauty—the cities—were a corner of Paradise that everyone strongly desired and to which they ran.

In the people's inspired faces and the buildings' enchanting proportions, we felt that everything bowed to divinity and was progressing in a profound atmosphere within boundaries drawn by celestial inspiration, as if swimming meaningfully and symmetrically, harmoniously, and brightly.

Especially during the latter years and despite various faults due to aged institutions, this atmosphere with all its beauty developed by love sighing and lamenting, by ardor constantly being carried away to ecstasy, and by spiritual pleasures that could make the pleasures of Paradise be forgotten, was like the final destination that we could reach… [The Golden Period of Time ,Izmir: 1994, 43–8]

The Islamic civilization inherited by the Ottomans viewed humanity and life as a whole. On the one hand, it valued science as the "mind's light," understanding that as God's vicegerent on Earth, men and women have the authority to improve the world with knowledge. On the other hand, it based its spiritual foundation on the dynamics and values of Islam, and thereby showed itself as a civilization of the mind, the heart, and the spirit.

This civilization saw nature, the subject-matter of sciences, as a place for manifesting the natural laws deriving from the Creator's Attributes of Will and Power. It never perceived scientific "laws" as incompatible with Islam, which is a complete and harmonious system of the laws coming from the Creator's Attribute of Speech. In the West, science was separated from religion and brought more harm than good. This mistaken approach also enslaved humanity to the very objects that men and women produced and used, thereby depriving them of all sublime values. It gives no significance to human life, but can kill hundreds of thousands in an instant.

Islamic civilization, on the other hand, accepted science as an expression of religion on a different level. By marrying the heart and mind on the individual level, and religion and scientific knowledge on the social level, it presented true happiness to a significant part of humanity for centuries. In his monumental Introduction to the History of Sciences, George Sarton divided history into chronological sections and names each section after the scientist who came to be identified with it. The 350-year period from the eighth century to the latter half of the eleventh century carries only the names of Muslim scientists: the Harizmî and the Bîrûnî periods, for example. Sarton also mentions the names of hundreds of Muslim scientists who made an imprint on their age. These scientists were not experts only in their particular fields or imprisoned in materialist patterns, as is the usual case today, but were experts in many fields. Most were also men and women of the spirit, mind, and heart. Similarly, most great Sufis were mathematicians, astronomers, doctors, historians, and chemists all at the same time.

In the mid-thirteenth century, Islamic civilization suffered a great shock in the form of the Mongol invasion. But despite its 500-year existence, it was full of life in spirit, nature, and essential dynamics due to the life energy flowing from its main resources. It recovered quickly. This time, Islamic civilization developed a new branch spreading from Anatolia to Europe, and gained greater splendor with the Ottoman Empire. However, upon entering the nineteenth century, its wing of science was broken and it suffered a withering of its spiritual force. The West, however, had transformed its scientific knowledge into a source of great strength and was already launched on its course of colonialist expansion.

This new development was largely due to certain socio-psychological factors created by the European Renaissance or even earlier. Europe's awakening to materialism and its hunger for material wealth led its people to investigate the world's riches. The power they gained through geographical and scientific discoveries and new technological inventions eventually led to world domination. Already collapsing, the Ottoman Empire could not withstand it. After the Turkish-Russian war in 1877, the First and Second Balkan Wars, and the First World War were deeply felt in every Turkish home. Finally, the occupation and division of Anatolia were added to these.

Together with all these defeats, Europe's apparent dazzling power and material superiority tended to extinguish the principles of belief, beginning with belief in God, which is the purpose of creation and life for Muslims. Islam was made the victim of Muslims' degradation. The Qur'an was pushed aside, and the Muslims' minds and hearts, hope and love, enthusiasm and feelings became paralyzed. Geographically and socially, the Muslim world came to resemble ruins in which owls make their nests. Over this grievous situation, the Poet of the Turkish National Anthem would lament:

I became like an owl lamenting over the ruins,

Having seen this heavenly land in its fall.

If I had lived in the "Time of Rose," I would become a nightingale;

O Lord, if only You had brought me earlier!

Our Houses from Past to Future

Our old, well-proportioned houses once gushed forth happiness and serenity, and meaning and peace flowed from them. The light that enveloped their surroundings reminded us more of moons and stars. Now we are trying to capture them in our dreams. We are consoled with dreams of them, and we live with the desire to realize those sweet dreams once more.

With their interiors and exteriors and their inhabitants, our houses were the most humane, spacious, sacred places, and the most open to the other world. When looked carefully, they seemed as if heavenly kiosk with the "houris" of Paradise in them, and eternality was felt in the light-diffusing atmosphere surrounding them. The halls (selamlik) where guests were received were open to the outer world and brought to mind places of worship and education, and places where earthly pleasures were tasted. The harem sections reminded one of heavenly kiosks and dervish lodges. The synchronization and fusion of these warm homes with the human spirit was so perfect and meaningful that their inhabitants listened to the poetry of the past and the future at the same time, and felt the idea of immortality permeate their hearts… [The Golden Period of Time, Izmir: 1994, 31–6]